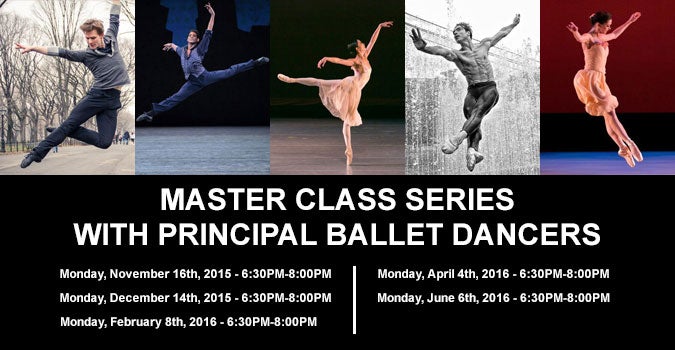 presented by The Performing Arts School at bergenPAC

"We are so fortunate to have this opportunity, a unique instructive initiative for us. beyondDANCE will be the very first and only school in the state of New Jersey to have such a liaison with dancers from companies of such world-wide renown," said Roberta Mathes, Artistic Director of beyondDANCE. “Having these master classes with top dancers in the world will enhance our school’s existing professional standard.”

Under the Artistic Direction of New York City Ballet Principal Dancer, Daniel Ulbricht, this season of 5 Master Classes will feature Principal Dancers from The New York City Ballet and American Ballet Theater . “There are no words to describe what the Masters of Dance program will bring. The kids will be challenged physically and mentally. They will push their own limits but importantly, they will be inspired to become the best that they can be. Having access and the ability to work with these individuals will help ignite the next generations of artists and audiences alike,” said Daniel Ulbricht.

This unique opportunity to work on a regular schedule with some of the world’s foremost dancers and teachers is a first for any private school of dance in the state of New Jersey.

"I am so pleased that the new Masters of Dance program now being produced by the always innovative bergenPAC, will begin November 16, 2015,” said Jeffrey Kaufman, the event coordinator. “Under the artistic leadership of New York City Ballet's extraordinary Principal, Daniel Ulbricht, this series will provide students and audience alike important insights into the world of dance led by some of the world's most renowned artists. Under the leadership of Alexander Diaz and Roberta Mathes of bergenPAC, I am very proud to have joined them in creating this exciting new program. Special thanks to Edmondo Schwartz for his leadership of bergenPAC and his vision in bringing this organization to ever greater heights of artistic excellence.”

Principals Daniel Ulbricht, Amar Ramasar, Stella Abrera, Gonzalo Garcia and Megan Fairchild (star of the Broadway hit “On The Town”) will be working with students enrolled in bergenPAC’s “Beyond Dance” classes.

Daniel Ulbricht was born in St. Petersburg, Florida, USA, and began his dance training at the age of 11.  At age 16, Mr. Ulbricht was invited by the School of American Ballet (SAB), the official school of New York City Ballet, to continue his training.  As a student at SAB, Mr. Ulbricht performed with New York City Ballet as a Jester in Peter Martins' The Sleeping Beauty. In December 2000, he became an apprentice with New York City Ballet and in November 2001 he joined the Company as a member of the corps de ballet. In January 2005, Mr. Ulbricht was promoted to the rank of soloist and principal dancer in May 2007.  During his time there, he has danced featured roles in a number of Balanchine, Robbins, Martins, and Wheeldon ballets including George Balanchine’s Prodigal Son, Tarantella, Stars and Stripes, A Midsummer Night’s Dream, Mozartiana, Nutcracker, Symphony in 3, The Steadfast Tin Soldier: Jerome Robbins’s Fancy Free, Interplay, Four Seasons; and Peter Martins’s Jeu de Cartes, Hallelujah Junction, Eight More, Swan Lake, Sleeping Beauty, Romeo + Juliet among many others.  Mr. Ulbricht has also danced Tarantella at the 2004 Kennedy Center Honors to celebrate the Balanchine Centenary.  He has also performed at a number of national and international festivals and galas.  Mr. Ulbricht is a guest teacher at the School of American Ballet, Ballet Academy East, as well as, teaching at a number of well-known national dance schools, private schools, and universities throughout the United States.  Mr. Ulbricht is currently the Artistic Advisor of Manhattan Youth Ballet.  Mr. Ulbricht is also the Artistic Director of New York State Summer School for the Arts in Saratoga Springs, NY.  Mr. Ulbricht is also founder and director of “Stars of American Ballet”, a touring group focusing on high art, education and outreach.

Amar Ramasar was born in the Bronx, New York.He began his studies at the School of American Ballet (SAB), the official school of New York City Ballet, in 1993. In addition, he studied at the American Ballet Theatre Summer Program and The Rock School of Pennsylvania Ballet. In July 2000, Mr. Ramasar was invited to become an apprentice with New York City Ballet, and in July 2001 he joined the Company as a member of the corps de ballet. In March of 2006 he was promoted to soloist and in October 2009 was promoted to Principal Dancer. Mr. Ramasar has performed in a number of Balanchine works including Balanchine’s Agon, Allegro Brillante, Who Cares?, The Four Temperaments, Symphony in Three, Stravinsky Violin and many more.  Mr. Ramasar has also performed in Jerome Robbins’ In the Night, Four Season, Fancy Free, West Side Story many more.  He Ramasar has originated works my Christopher Wheeldon, Peter Martins, Susan Stroman, Benjamin Millipied, Alexei Ratmansky and more.

Stella Abrera of South Pasadena, California, began her studies with Philip and Charles Fuller and Cynthia Young in Pasadena. She continued her studies with Lorna Diamond and Patricia Hoffman at the West Coast Ballet Theatre in San Diego. She also spent three years studying at the Halliday Dance Centre in Sydney, Australia.  Abrera joined American Ballet Theatre as a corps de ballet member in 1996 and was appointed a Soloist in 2001. Some of her featured roles include Afternoon of a Faun, Calliope in Apollo, Gamzatti in La Bayadèиre, the Ballerina in The Bright Stream, Cinderella, Aurora in Coppéйlia, Gulnare in Le Corsaire, Diversion of Angels, Mercedes, the Driad Queen in Don Quixote, Helena in The Dream, Fancy Free, Myrta in Giselle, Manon in Lady of the Camellias, Lescaut's Mistress in Manon, Sugar Plum Fairy, in the Nutcracker, Emilia in Othello, Petrouchka, Raymonda, the Lilac Fairy, and Princess Florine in The Sleeping Beauty, The Leaves Are Fading, Meadow, Petite Mort, Sinfonietta, Les Sylphides, Symphonic Variations, Symphony #9, Symphony in C, Thirteen Diversions, Within You Without You: A Tribute to George Harrison, Without Words and workwithinwork, and featured roles in Black Tuesday and Gong.  Abrera received the Gold Medal at the Royal Academy of Dancing's Adeline Genéйe Awards in London in 1995.

Gonzalo Garcia is a principal dancer with New York City Ballet. Born in Zaragoza, Spain, Mr. Garcia began studying ballet at the age of eight at Maria Avila's school. In 1995, he attended the summer session at San Francisco Ballet School. Following this session, Mr. Garcia participated in the Prix de Lausanne, becoming the youngest dancer to receive a gold medal. He then returned to the School to resume his studies and was selected by Helgi Tomasson, Artistic Director of San Francisco Ballet, to perform in a world premiere ballet created especially for the 1996 Spring Student Showcase. Mr. Garcia joined San Francisco Ballet as a member of the corps de ballet in March 1998. In 2000, he was promoted to soloist, and in 2002 to principal dancer. Mr. Garcia was invited to perform Balanchine's Ballo della Regina with New York City Ballet as part of the Company's Balanchine Centennial Celebration in 2004. Mr. Garcia joined New York City Ballet in October of 2007 as a principal dancer.

Ms. Fairchild is a principal dancer with New York City Ballet. Ms Fairchild was born in Salt Lake City, Utah, and began her dance training at the age of four, studying with Judy Levitre and Kaelynne Oliphant at Dance Concepts in Sandy, Utah; and at the Ballet West Conservatory in Salt Lake City with Sharee Lane, Deborah Dobson, and Maureen Laird. While at the Ballet West Conservatory, Ms. Fairchild was also a Ballet West trainee. Ms. Fairchild entered the School of American Ballet (SAB), the official school of New York City Ballet, in the fall of 2000. In November 2001, Ms. Fairchild became an apprentice with New York City Ballet, and in October 2002 she joined the Company as a member of the corps de ballet. Ms. Fairchild was promoted to the rank of soloist in February 2004, and in January 2005, she was promoted to principal dancer.  Since joining NYCB Ms. Fairchild has performed in numerous works including Balanchine’s Apollo, Allegro Brillante, Ballo della Regina, Chaconne, Coppélia, Danses Concertantes,Divertimento from "Le Baiser de la Fée", Divertimento No. 15, Donizetti Variations,Duo Concertant, The Nutcracker, Harlequinade, A Midsummer Night's Dream, Raymonda, Variations, Jewels, Serenade, La Source, Square Dance, Stars and Stripes, The Steadfast Tin Soldier, Symphony in C,Tarantella,Tschaikovsky Pas de Deux, Theme and Variations, Valse-Fantaisie,Vienna Waltzes, Western Symphony, as well as ballets by Peter Martins, Christopher Wheeldon, Alexei Ratmansky, and others. Recently, Ms. Fairchild has returned to the New York City Ballet after having completed a one year appearance as the star of the Broadway revival of ON THE TOWN.

The program provides students with unique and “hands-on” arts training by industry professionals that allow them to gain real world experience and enhance academic achievement through the arts. bergenPAC’s arts education initiatives occur on-site at our new Performing Arts School building at 1 Depot Square, Englewood, NJ or off-site at other schools. The school reaches more than 30,000 students annually.

The Performing Arts School offers basic and professional level performing arts classes and ensemble groups and productions in theater, dance, and music for students of all ages. The school also offers beyond bergenPAC, a school Partnership Program with school districts throughout the area.

Founded in 2003, the 1,367-seat Bergen Performing Arts Center, or bergenPAC, is the area’s cultural mecca. Housed in a historic Art Deco-style theater boasting one of the finest acoustic halls in the United States, bergenPAC attracts a stellar roster of world-class entertainment. The jewel in our crown is The Performing Arts School at bergenPAC – the innovative, educational performing arts initiative that reaches more than 30,000 students annually. The Performing Arts School provides community youth, age 2 months to 21 years, with unique, “hands-on” training in music, dance and theater by industry professionals. It is through the ongoing generosity of sponsors, donors and patrons that the not-for-profit 501(c)(3) corporation bergenPAC and The Performing Arts School are able to thrive and enrich our community.