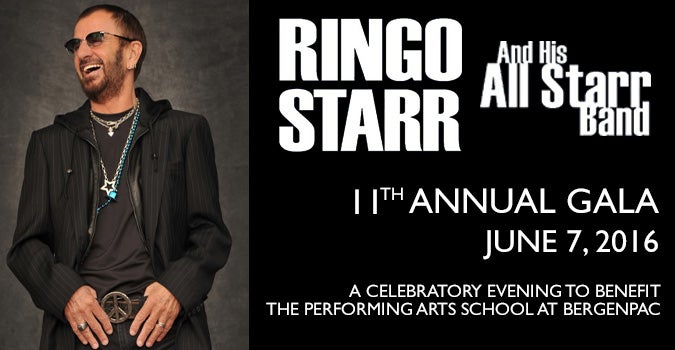 A celebratory evening to benefit The Performing Arts School at bergenPAC featuring the legendary music icon Ringo Starr and His All Star Band.

Peace and love are his life’s rhythm and melody, and he propels this universal message in everything he does: His evocative artwork, his enthused live performances, his legendary songs, all imbued with the joy, reflection, and wisdom of the music icon the world knows and loves simply as “Ringo.”

Ringo Starr and His All Starr Band features Todd Rundgren, Gregg Rolie, Steve Lukather, Richard Page, Warren Ham and Gregg Bissonette. This current All Starr line up is the 12th and longest running, and as Ringo recently told The Boston Globe, “I love this band – we have a lot of fun together on and offstage, so here we come again.”

That love is evident in their performances, exemplified by this review in the Sarasota Tribune-Herald: “This latest incarnation of Starr's travelling show has been together now going on three years and watching them interact as an actual band, rather than a supergroup taking turns out front, is almost as fun, almost, as watching and screaming “I love you” at the front man who will forever be part of the biggest rock 'n' roll band of all time.”