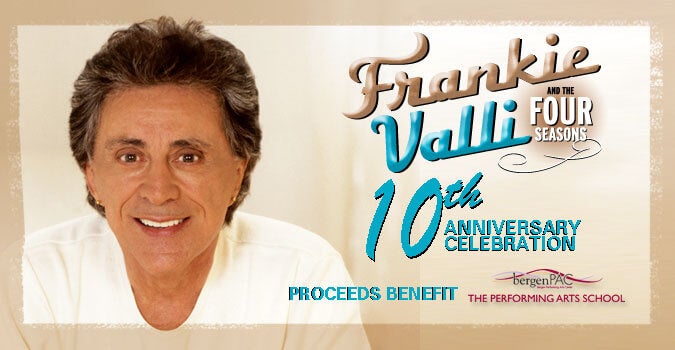 A fresh look at a classic show at this 10th anniversary celebration night with Frankie Valli & The Four Seasons promises to be one for the ages. The one time only exclusive engagement in an intimate setting is his only Northern NJ appearance this year and benefits ten years of non-profit arts education at The Performing Arts School at bergenPAC. Join us for a pre-show anniversary reception in the Drapkin Cabaret and Lounge at the VIP Level and a night of magic with Frankie Valli and The Four Seasons.

“It has been an honor to support arts education in Bergen County for 10 years,” said Dominic Roncace, bergenPAC CEO. “It is our pleasure to look forward to another 10 years of providing programs that support the minds and bodies of our community members. We have extended our offerings to include Indian, Korean, underserved, and special needs initiatives, and soon to come is our Latin Cultural Initiative and ever-expanding partnerships with our area schools. We are always looking for ways to reach out to our community and we are proud to serve with such distinction.”

Originating from the projects of Newark, NJ, Frankie Valli used his remarkable range from baritone to falsetto to launch his Rock N Roll Hall of Fame career. One of the greatest vocal groups of all time, Frankie Valli & The Four Seasons charted hit after hit in the early ’60s and have been harmonizing right along ever since. With his three-and-a-half-octave vocal ranges, over 100 million records sold and a multi-decade career, the iconic Frankie Valli, along with his The Four Seasons, demonstrate why they're still the hottest ticket in town. With classics too numerous to list, their impressive string of chart-toppers are gems from a bygone era, and always a pleasure to rediscover. With a catalog of hits like: "Can't Take My Eyes Off of You," "Big Girls Don't Cry," "Rag Doll," "Grease," "Dawn," "Let's hang On," "Sherry," "December 1963 (Oh What a Night)" and so many more, Valli & The Four Seasons are the real-deal.

He has toured almost continuously since 1962, and his songs have been omnipresent in such movies as The Deer Hunter, Dirty Dancing, Mrs. Doubtfire, Conspiracy Theory and The Wanderers. As many as 200 artists have done cover versions of Frankie’s “Can’t Take My Eyes Off You,” from Nancy Wilson’s jazz treatment to Lauryn Hill’s hip-hop makeover. His songs also could be heard in the critically acclaimed “The Sopranos”. Valli has once again been rocketed into the public eye as the original Jersey Boy with the enormous success of the Tony Award winning Broadway show which chronicles the life and times of Frankie and his legendary group.

Founded in 2003, the 1,367-seat Bergen Performing Arts Center, or bergenPAC, is the area’s cultural mecca. Housed in a historic Art Deco-style theater boasting one of the finest acoustic halls in the United States, bergenPAC attracts a stellar roster of world-class entertainment. The jewel in our crown is The Performing Arts School at bergenPAC – the innovative, educational performing arts initiative that reaches more than 30,000 students annually. The Performing Arts School provides community youth, age 2 months to 21 years, with unique, “hands-on” training in music, dance and theater by industry professionals. It is through the ongoing generosity of sponsors, donors, members, and patrons that the not-for-profit 501 (c)(3) corporation bergenPAC and The Performing Arts School are able to thrive and enrich our community.