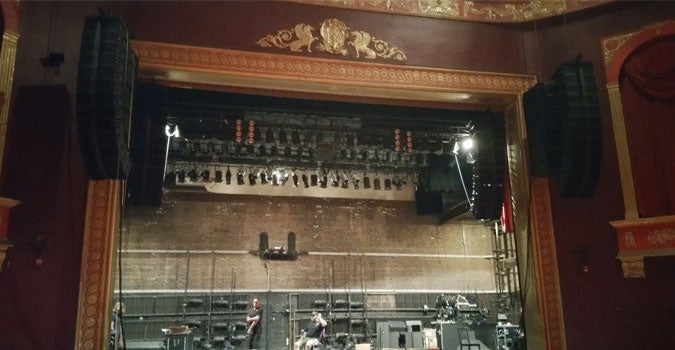 Bergen Performing Arts Center located at 30 North Van Brunt Street in Englewood, New Jersey’s recent acquisition of a new state of the art sound system and its installation of sound boards mark a new direction for the performing arts center in Englewood, New Jersey. Boulevard Pro, installed two Yamaha CL5 Digital Audio Consoles and four Rio 3228 input/output boxes that perfectly execute the acoustic integrity of each and every performance to be held at the concert venue. Additionally, bergenPAC acquired two complete CL systems, of which they can rotate the consoles from the theater to the Drapkin Cabaret & Lounge as well as The Performing Arts School at bergenPAC. “This new technological advancement provides each seat in the theater with the most pure and authentic sound no matter where you sit,” said Dominic Roncace, bergenPAC CEO.

Following the installation, patrons and artists alike offered testimonials concerning the vastly improved sound quality. Ringo Starr, music legend, performed at the venue at the recent bergenPAC Gala in support of the Performing Arts School at bergenPAC, also the sound system’s debut, and announced to a pleased audience, “I love the sound of this venue,” adding, “The sound kicks, I’m telling you!”

The sound about which the legend offered high praise, is based on a flown system of modular loudspeakers, under balcony fill, and speakers distributed across the stage lip that provide a direct “front fill” for those seated in the first few rows from the stage. The various components of this system provide a coherent sonic signature that can be controlled, monitored, and amplified based on advanced filter logarithms and high speed data transfer. Joe Feola, bergenPAC Technical Director explained, “The CL5 fits our needs perfectly. By accommodating the files of other Yamaha boards, it helps to speed up the load in. The venue hasn’t ever sounded better.”

The success that the new sound system has had in engaging the audience and providing a high quality production is unprecedented. It has delivered high clarity and succeeded in its purpose of evenly distributing sound level pressure while simultaneously increasing coverage area over the entire audience held in the theater.

Roncace, in response to all of the positive feedback the sound system has received since its installation, commented, “This technical addition to the locale has produced acclaim within surrounding local communities and has had a profound impact on performances. It will attract more big-name performers from all over the world.”

Those involved in the attainment of performers and the production of performances are confident that the improvement in the sound system will have a profound impact on both the type and quality of performances in the near future.  “The installation of this new sound system is the first of only many improvements we want to make to the theater. We intend to build more bathrooms, install an elevator, renovate our main stage, bring in new seats, and do more improvements on our Performing Arts School at 1 Depot Square,” Roncace added. “bergenPAC is excited to offer the best in arts and education to Bergen County and these improvements will allow us to continue to further that mission far into the future. The best is yet to come.”

Founded in 2003, the 1,367-seat Bergen Performing Arts Center, or bergenPAC, is the area’s cultural mecca. Housed in a historic Art Deco-style theater boasting one of the finest acoustic halls in the United States, bergenPAC attracts a stellar roster of world-class entertainment. The jewel in our crown is The Performing Arts School at bergenPAC – the innovative, educational performing arts initiative that, through programs, classes, outreach, school shows, and main theater presented shows, reach more than 30,000 students and community youth annually. The Performing Arts School provides community youth, age 2 months to 21 years, with unique, “hands-on” training in music, dance and theater by industry professionals. It is through the ongoing generosity of sponsors, donors, members, and patrons that the not-for-profit 501 (c)(3) corporation bergenPAC and The Performing Arts School are able to thrive and enrich our community.