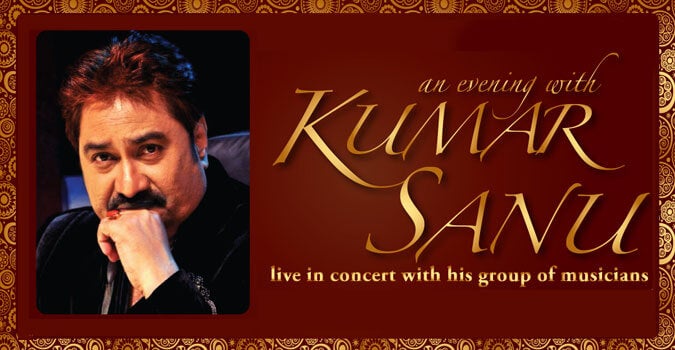 Kumar Sanu comes to bergenPAC live in concert with his group of musicians in his only NJ appearance. Kumar Sanu is one of the most popular playback singers of Bollywood. He holds the Guinness Book world record for recording the maximum number of songs in a day at 28 songs. He is famous in Bollywood as a melody singer.

Kumar Sanu was born in Kolkata. Early in his career, it was suggested that he change his name from Kedar Bhattacharya to Kumar Sanu because of the prevalent caste-region-based favoritism in Bollywood and to give him wider appeal outside of a strictly Bengali audience. He has enthralled film audiences with his voice for decades and has recorded more than 17,000 songs. He was honored as the Artist of the Decade at the International Indian Film Academy (IIFA) Awards. He won the Filmfare Best Male Playback Award for 5 consecutive years. In 2009, the Government of India awarded him Padma Shri, India's fourth highest civilian honor, in recognition of his achievements.

*VIP Ticket Levels (Available by calling or at the box office only – not available on Ticketmaster):

Founded in 2003, the 1,367-seat Bergen Performing Arts Center, or bergenPAC, is the area’s cultural mecca. Housed in a historic Art Deco-style theater boasting one of the finest acoustic halls in the United States, bergenPAC attracts a stellar roster of world-class entertainment. The jewel in our crown is The Performing Arts School at bergenPAC – the innovative, educational performing arts initiative that reaches more than 30,000 students annually. The Performing Arts School provides community youth, age 2 months to 21 years, with unique, “hands-on” training in music, dance and theater by industry professionals. It is through the ongoing generosity of sponsors, donors, members, and patrons that the not-for-profit 501 (c)(3) corporation bergenPAC and The Performing Arts School are able to thrive and enrich our community.