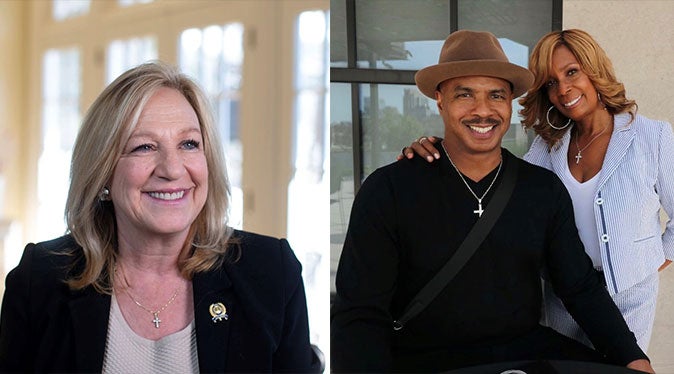 bergenPAC ADDS FOUR NEW MEMBERS TO BOARD OF TRUSTEES

(Englewood, New Jersey – August 15, 2022) Bergen Performing Arts Center (bergenPAC) today announced the addition of four new members to its Board of Trustees. Ray Chew, Vivian Scott Chew, Steven Goldstein, and Valerie Vainieri Huttle joined the board of bergenPAC at a critical time as the storied theater’s $15 million Invest in the Arts Capital Campaign funds a comprehensive restoration and renovation of the historic venue.

“We are pleased to welcome our new trustees, whose creativity and experience in a variety of valuable facets will play an important role in helping move the Arts Center into the future,” said Robert Cook, Chairman of the Board of Trustees and one of the founding trustees of bergenPAC in 2003. “Their singular sense of the arts and social justice, both of which bergenPAC is fully committed to supporting, is a significant factor that will shine a light on bergenPAC as a destination for patrons, and our Performing Arts School, for decades to come.”

Valerie Vainieri Huttle expressed, “I’m excited to officially be appointed to bergenPAC’s Board of Trustees during this time of their renovation of the theater and the expansion of their arts education programs. I have seen firsthand the benefits of investing in the arts community and its impact on children and am fully committed to preserving that legacy for future generations.”

Ray Chew’s is regarded as one of America's top television music directors, producers, and composers and can be found across multiple television networks and streaming platforms. A much sought-after talent, Chew is the music director for the hit show "I Can See Your Voice." Led by host Ken Jeong, the FOX musical game show took the top spot as America's number one new unscripted series of 2020. Its second season premiered on FOX on Jan. 5, 2022.

His tenure as music director for Fox's "American Idol" inspired some of the best talent in the storied competition's history and produced over 300 contestant iTunes downloads. Ray has also served as music director for several network television series, including "It's Showtime at the Apollo" and BET's "Sunday Best." His guidance and leadership is highly regarded for prestigious music specials and historic landmark events such as Grammy’s, Dancing with The Stars and major network music specials viewed throughout the world.

Vivian Scott Chew is an innovative figure in the global music and entertainment industry with an accomplished history at ASCAP, Polygram Records, and Sony Music. As founder and Principal of TimeZone International, the first U.S.-based African American-owned international music marketing company. Vivian provides recording artists with international marketing and promotion services throughout the world.

With her husband, Ray Chew, she is a founding partner in Chew Entertainment - a premiere event production firm. Together, they produce live music events, working with clients such as The Grammys, American Idol, Dancing with the Stars, The National Urban League, New Jersey Performing Arts Center, Juvenile Diabetes Research Foundation, The American Heart Association, Jackie Robinson Foundation, and Carnegie Hall, where she and Ray are proud to have produced multiple installments of their star-studded benefit concert, a “Night of Inspiration.”

Vivian serves on the boards of the New Jersey Council on the Arts, Covenant House International, and Living Legends and is an advisor to the Universal Hip Hop Museum. She is the Co-Founder and President of The Power 2 Inspire Foundation, which was created with her husband to identify and nurture music creators and industry leaders.

Steven Goldstein is a staunch advocate for social justice, the overarching mission of his wide-ranging career in government, politics, civil rights, television, religion, and nonprofit leadership. As founder and former Executive Director of Garden State Equality, New Jersey's statewide organization for LGBTQ equality, he led grassroots campaigns to pass more than 200 civil rights laws at the State and local levels. In an article on his leadership, The Harvard Law and Policy Review stated that Steven had built an immensely successful "model for the rest of the country."

After New Jersey won marriage equality, Steven became National Executive Director of the Anne Frank Center for Mutual Respect. Huff Post wrote that the organization "catapulted to national prominence" under his leadership. In 2019, HarperCollins published Steven's first book, "The Turn-On: How the Powerful Make Us like Them." The book includes many of Steven's original advocacy and communications strategies, which he taught as a Rutgers law professor. Porchlight Book Awards named "The Turn-On" one of the Top 5 marketing books of the year.

Valerie Vainieri Huttle of Englewood has served eight terms as a member of the New Jersey State Assembly representing Legislative District 37 and served on the Bergen County Board of Chosen Freeholders, now known as the Board of County Commissioners from 2001 to 2006. She served as Board Chairwoman from 2003 to 2004. Valerie served as an ex-officio member of the New Jersey State Council on the Arts since 2005 and a member of the Gaming, Tourism and Arts Committee since 2009. In 2003, she helped establish Bergen Performing Arts Center after the John Harms Theater closed its doors in Englewood.

About bergenPAC's Capital Campaign, Invest In The Arts: Bergen Performing Arts Center (bergenPAC) is a theater of and for the community it serves throughout northern New Jersey by leading the way with a creative focus, educational resource, and engine of economic vitality. A nonprofit 501 (c)(3) organization, bergenPAC's mission is to make live performing arts and arts education accessible to its diverse community by building an innovative home for artists and teachers of excellence and relevance who entertain, enlighten, inspire, and inform their audiences and students. bergenPAC's Performing Arts School is the areas' leading cultural and arts educational institution in Northern New Jersey, which shall guide and liberate the imagination of our youth and expand the lives of our adults. Invest in the Arts by Taking a Leading Role Supporting the Renovation and Arts Education. For more information, visit www.bergenpac.org. visit www.bergenpac.org or @bergenpac

Founded in 2003, the 1,367-seat Bergen Performing Arts Center, or bergenPAC, is the area’s cultural mecca. Housed in a historic Art Deco-style theater boasting one of the finest acoustic halls in the United States, bergenPAC attracts a stellar roster of world-class entertainment. The jewel in our crown is The Performing Arts School at bergenPAC – the innovative, educational performing arts initiative that, through programs, classes, outreach, school shows, and main theater presented shows, reach more than 30,000 students and community youth annually. The Performing Arts School provides community youth, age 2 months to 21 years, with unique, “hands-on” training in music, dance and theater by industry professionals. It is through the ongoing generosity of sponsors, donors, members, and patrons that the not-for-profit 501 (c)(3) corporation bergenPAC and The Performing Arts School are able to thrive and enrich our community.